I was really pleased to be asked by Johnno Casson to make another video for him. He is such a genuinely nice person and his music always make me smile. So we had a jaunt around Mersea island and Colchester to promote his new album ‘Chippa’. So if you like it then you can head to his Bandcamp page and get a copy.

“I feel about Snippet much like John Peel felt about The Fall – Snippet: A National Indie Treasure”

When writing this album, I went with optimism. Maybe it was because I needed to, to get me through the day and not always be wrapped up by pain, or that an inner voice was calling for the sunny disposition inside of me to rise up again, that it had been missed and it didn’t come out into the sunshine often enough.

I took the decision to not use my art to moan about the pandemic, rather take an optimistic and hopeful route into our new tomorrows. Life has become a series of short wonderful bursts of loveliness in recent years after all, so I’m getting to truly appreciate that and know it is plenty enough for me. Chippa is my journey over the last 12-18 months that ebbs and flows in light and shade just like my life has, with songs blending into the sounds of the street whilst life tries to gently go about its business.

With the inspiration of my family, my home and our nature suggesting to me that being upbeat and blocking out the discomfort you are in by ‘just being’ is enough and should be cherished. Hey, even in the hardest times – a change is always just around the corner, right? I wanted this album to be a journey for the listener and I think it benefits from being listened to as a whole piece, well it did for me as I listened to it all just now (it clocks in as a respectable 43 minutes, so not overly long). I sit here feeling proud of what I have created, not arrogant of its amazingness, just satisfied with the job I have done (with Luke Barwell doing a great job on the mastering).

Nature and the need to switch off and just enjoy life feature a fair bit, with melody, hooks, rhyme and beatiness often lifting its head the highest, as my kind of wonky indie pop music has a habit of doing. I’ll always have a cheeky and active imagination and I hope that comes through, in not taking yourself too seriously and knowing that life is a million times easier if you can laugh lots and get completely lost and zenned out in the process of being creative in your own voice, your own sound.

Chippa is personal, observational, reflective and very appreciative of life. I got that sense when crafting these songs and these sound collages, they soothed and made me happy when I wasn’t always feeling that way. Making this album lifted my spirits and I hope it does the same for you.

All handmade in Colchester with love. The back story – Former caretaker, London Underground railman and local council relationship manager, Johnno started out writing songs at 15 in his bedroom on a Hackney council estate with a tennis racket for a guitar and a soap-on-a-rope microphone.

Johnno recorded and toured with bands such as Deep Joy who were born out of the early 90’s London acid house/club scene – working with Andrew Weatherall and onto the early years of trip-hop on James Lavelle’s Mo ‘Wax label and being championed by Gilles Peterson. They dented the charts in New York, Tokyo and London and also worked with legendary On-U-Sound label founder and producer Adrian Sherwood. In recent times has been perfecting his coleslaw making skills, whilst being diagnosed with M.E and becoming a well-respected figurehead on the British D.I.Y./Wonky Pop scene through releasing music as himself, Snippet, Old Tramp and Walken400, earning the accolade of being named by Tom Robinson as the most played BBC Introducing artist ever on his BBC 6 Music show.

A walk-around The Old Workhouse for an update

Installing a digester at The Old Workhouse Alain plays the Ngoni, a West African harp. He enchants with sweet, uplifting melodies from his home country of Burkina Faso and from across Africa. With influences from all over the world, Alain’s music spreads joy and happiness.
Read on Fred Slattern gives another great performance at the Sunday Matinée. Not to be missed.
Read on 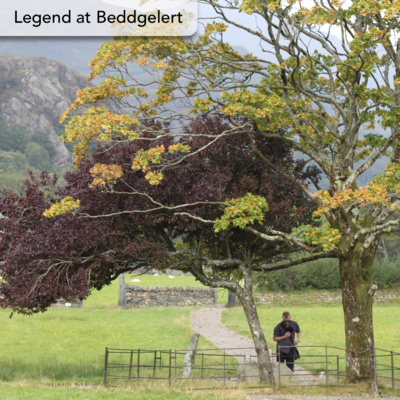 This is the tale of how Beddgelert got it's name.
Read on
Go to mobile version